To me, methought, who waited with a crowd,
There came a bark that, blowing forward, bore
King Arthur, like a modern gentleman
Of stateliest port; and all the people cried,
"Arthur is come again: he cannot die."

Catching up to date with Arthurian Literature, the 30th volume of the journal will be published later this year, and the publisher now includes the following pre-publication information on its website:

The influence and significance of the legend of Arthur are fully demonstrated by the subject matter and time-span of articles here. Topics include Perceforest in historical context; a new source for Malory's Morte Darthur; magic and the supernatural in early Welsh Arthurian narrative; and ecology in Sir Gawain and the Green Knight.

Posted by Blog Editor, The Association for the Advancement of Scholarship and Teaching of the Medieval in Popular Culture at 2:35 AM No comments: 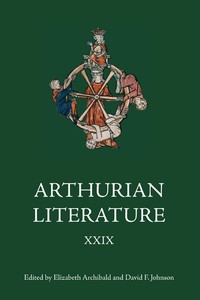 Following up to an earlier post, the contents list for Arthurian Literature 29 (for 2012) has been made available but (frustratingly) not linked to its authors. The volume itself was published in December 2012.

The influence and significance of the legend of Arthur are fully demonstrated by the subject matter and time-span of articles here, ranging from a mid twelfth-century Latin vita of the Welsh saint Dyfrig to the early modern Arthur of the Dutch. Topics addressed include the reasons for Edward III's abandonment of the Order of the Round Table; the 1368 relocation of Arthur's tomb at Glastonbury Abbey; the evidence for our knowledge of the French manuscript sources for Malory's first tale, in particular the Suite du Merlin; and the central role played by Cornwall in Malory's literary worldview. Meanwhile, a survey of the pan-European aspects of medieval Arthurian literature, considering key characters in both familiar and less familiar languages such as Old Norse and Hebrew, further outlines its popularity and impact.

2 Edward III's Abandoned Order of the Round Table

3 King Arthur's Tomb at Glastonbury: The Relocation of 1368 in Context

4 Benedict of Gloucester's Vita Sancti Dubrucii: An Edition and Translation

8 Peace, Justice and Retinue-Building in Malory's 'The Tale of Sir Garethy of Orkney'

10 The Fringes of Arthurian Fiction

Posted by Blog Editor, The Association for the Advancement of Scholarship and Teaching of the Medieval in Popular Culture at 2:30 AM No comments:

Celebrating our twentieth anniversary in 2020, The Alliance for the Promotion of Research on the Matter of Britain is dedicated to embracing the full corpus of the Arthurian tradition and to promoting study, discussion, and debate of representations of the legends in all their forms as produced from the Middle Ages through the contemporary moment (and beyond). In various incarnations, our organization has been in existence since 2000 and is presently an independent affiliate of The Association for the Advancement of Scholarship and Teaching of the Medieval in Popular Culture.

Founder of the Alliance for the Promotion of Research on the Matter of Britain, Michael A. Torregrossa, is a specialist in popular Arthuriana. A graduate of the Medieval Studies program at the University of Connecticut (Storrs), he has presented his research on popular medievalisms at regional, national, and international conferences, and he is especially interested in the careers of Merlin and Mordred on film and television. Michael's published work includes essays on the Matter of Britain in film, television, and the comics medium, annotated bibliographies of the same, and a series of entries for the three latest updates to The Arthurian Encyclopedia. Michael is also the founder of The Association for the Advancement of Scholarship and Teaching of the Medieval in Popular Culture.

Resources for Studying the Matter of Britain

Resources for Teaching the Matter of Britain

Blogs of the Matter of Britain